I have seen hundreds, and perhaps thousands, of newborn Holstein calves over the last 3 and a half years.

Back in veterinary school, I saw a black calf with white spots, or vice versa. Now I see so much more in a calf.

I see chest and hip shape, muzzle curve, ear angles, neck length, elbow rotation, fetlock breakover, craniolateral position of the eyes and more. I am not even trying to look at those things, I just see them now. It fascinates me because it was happening over time without my full knowledge.

There is some part of my brain that collects, stores, and compares those measurements and observations, without me even aware of it, and it is working all the time. It’s a process that builds, and even as it conitinually ran in the background of my brain, I never really noticed it until my daughter was born.

In that moment that I saw her present to the world, I realized, like Jon Snow, I knew nothing. It was humbling to see this little life and not know anything about how a brand new human looks. It was a token moment, feeling like the moment the window pane trembles, and the walls shudder, under the lashing rain and burgeoning gusts of a thunderstorm. In that instance, you realize just how much the window and walls mean to your survival.

Seeing her for the first time told me very clearly that my life had crossed some threshold and would never be the same.

Our ship had found itself in new waters.

I had a certain amount of free time at my Alma Mater, when I was nestled in that beautiful northern land of Moscow, Idaho.

The amount of time waxed and waned with the cycles of the semester. In the most crowded of seasons, I was with Chi Alpha, studies, Resident Assistant duties, College of Natural Resources Ambassador events, and volunteering with the capital Dr. Finch – that I planned out my entire day in 15 minute blocks – including the shower.

When the pendulum swung the other way, specifically late finals week, or during some of the holidays, I had an over-abundance of free time. One Thanksgiving break, I spent a couple 14 hours days in the computer lab going through Excel modules and teaching myself ANOVA, and on another occasion I watched all 4 Shrek movies in a single day.

Well one of these free days, I believe it was during a class cancellation due to a snow day (which in Idaho meant we got something like 40 inches of snow in a couple hours), I decided to practice my art of picking locks. I purchased a padlock or two and went about to make a set of rudimentery picks.

I already had an anvil, and a forging hammer, so all I needed was some small pieces of decently strong steel. Tool steel, like that found in a screwdriver or a blade, would be too brittle to fashion into a pick on a cold anvil. The blends used in coated paper clips aren’t stiff enough at their size, so I settled on the desire to find some old non-galvanized nails, and if I worked them around on the anvil for a bit I could harden them up enough to make a functional pick.

It would have been easy to aquire those nails if I had been back at the farm, for dad kept a broad variety of styles and sizes in a coffee can in the garage. I didn’t know anyone nearby Moscow with a woodshop or an old nails box. So I went walking the streets, leatherman in my pocket, looking for a pile of deserted pallets, or scraps of wood. These piles proved elusive, and then the thought came to check the old telephone and electric poles.

Within a couple blocks of 6th street, and a few minutes of pulling and prying with my trusty Leatherman, I had a range of old nails and more than enough for my project. Staples, useless to my purposes, outnumbered the nails a thousand to one, but there were still ample nails for me. As I removed them, I wondered what flyer, or missing pet poster, those nails must have originally held, and how many years before had someone, standing at that very spot, placed it – only to be forgotten shortly after?

When I needed nails, someone from the past, their reasoning now long forgotten, had placed them into an utility pole for me. Long after their original purpose of holding a flyer had ended, tens of thousands, if not millions, of people had passed them by, and yet none of them took the nails for their own.

When I needed nails, I found them right out in front of us all, available to everyone, yet left for me.

We parked on the historic route 66 in Williams Arizona and found cold and clean air a refreshing change for the morning.

Walking just around the block, we stopped in at Anna’s Canyon Cafe for breakfast. It was still early, and the only patrons in there were a couple members of the Sheriffs department and an elderly couple.

The decor was simple and antique Western just as you’d expect. Gilded mirrors and western photos adorned the walls. The old wood floor and bar, with a green chair rail all around, and swinging double doors to the backroom, made it feel like a saloon.

I had the veggie omelette, Tiffany ordered the sausage, biscuit and gravy, Katarina ate from both of our plates we all three enjoyed our food. If you like a quiet place for a hot comforting breakfast (crispy and oily hash browns were in both our dishes) check out Anna’s Canyon Cafe. They’ve taken care to save some of that old wild west feel.

Parenthood has forever changed me, kind of like marriage did.

Back when I was a single man, I had so much time alone. Evening after evening, if I didn’t have plans with friends, I went to sleep in silence. I often ate my supper alone. I watched the television program that I wanted to, or listened to the music that I wanted to (I must have played Emotionalism a couple hundred times). My bathroom cabinet was stocked only with products that I used. The blankets and sheets on my bed were the blankets and sheets that I chose. Yes I was limited by budget and location, but other than that I had full autonomy. I could get anything I wanted from the local Salvation Army, and decorate my apartment in the best way I saw fit.

After marrying, I found a forever date. Dinner out – now always for two. I get to consider someone else in every decision.

Now that we have a baby, the dynamic has changed again.

It’s a whole new level of taking another into consideration.

Even when my wife and I step out on the porch for a few minutes of coffee and contemplation, and our little one is happily playing with her cousin and auntie Emily, she will find us. She is not easily dissuaded. 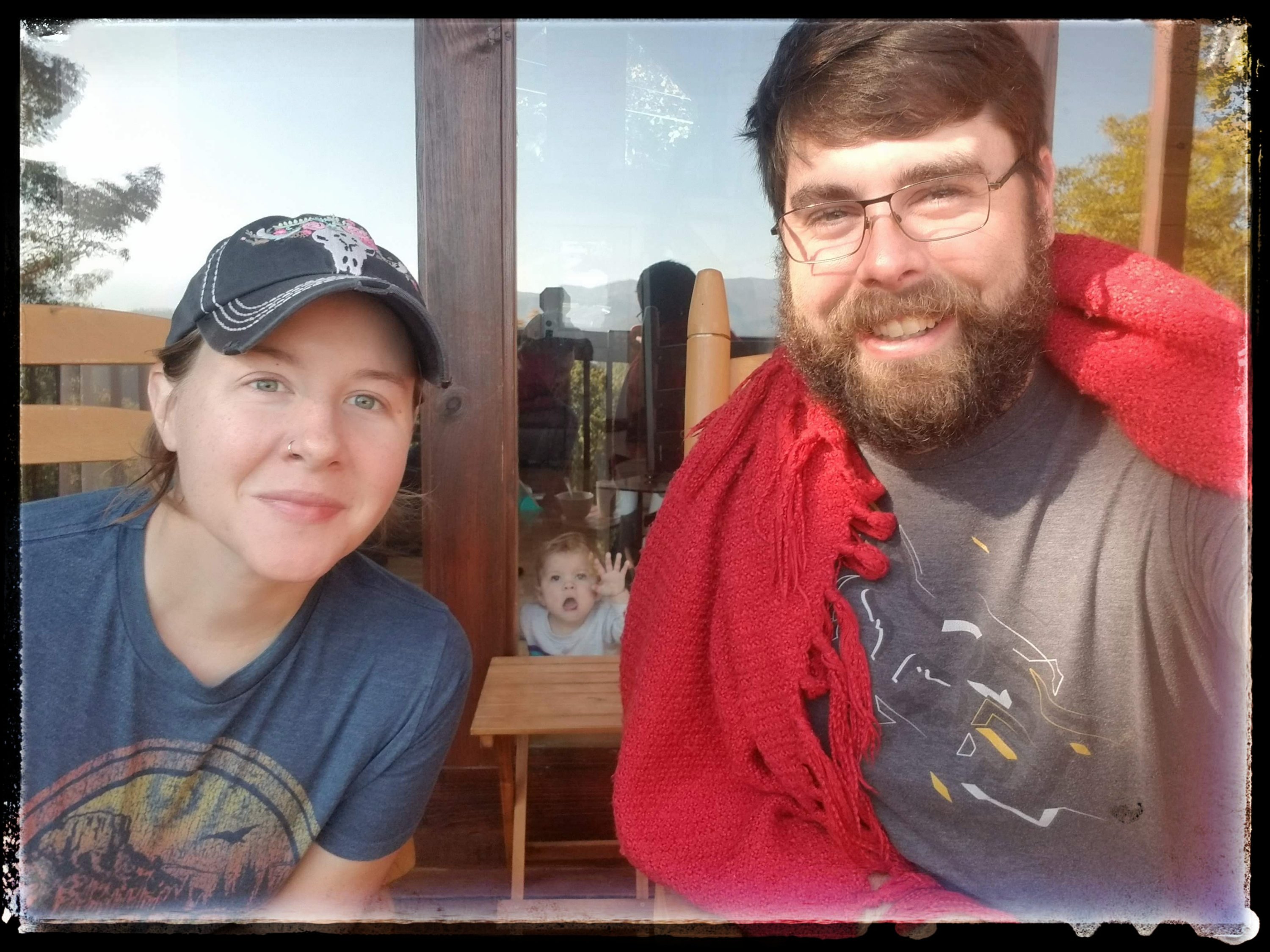 I made a mistake last week.

A friend set up a training session for some fellows in our new church plant. These guys have signed up to volunteer on a specific team, and they need to go through the training before they are cleared to volunteer.

I am the coordinator for that team in our new church, and we are very short handed, so it was a great help to me that my friend set up the training. An older fellow agreed to do the training, and I had two guys on my team who said they could go to the training.

As we got closer to the date of the training, Sunday at 9:00 am, I confirmed the RSVP with the two guys on my team. I had hoped for more guys to be able to make it, and I didn’t want to waste the time of the older fellow.

Everything looked like it was going to turn out well, and then Saturday morning I got a message that no one showed up for the training.

The training was Saturday morning, not Sunday morning.

I had misread the message and put it on my calendar on the wrong day. I had told those fellows the wrong day!

I felt like I shouldn’t have stepped up to coordinate the team, like they would be better off without me. I felt like I was the reason for much pain in these fellows lives – but that isn’t true. I made a mistake. I did not intentionally cause these men any trouble.

If this had been the other way, if someone had stood me up because they misread my message and they had the wrong date, I would understand and I would not think ill of them.

So why do I feel so much worse, about myself, than I would about someone else?

That was the message of what might, or might not, have been the very first class lecture in my time at veterinary school. It’s possible there were other lectures before it, but that was the most memorable lecture of the early days.

Like most other lectures, this one began with a PowerPoint show, unlike other lectures it was a quick succession of pictures. Dr. Jim said he would share with us the secret to success at veterinary school.

First picture up was of Fabio, in all his extravagance, and Dr. Jim said “if this is your boyfriend, break up with him”.

Then a picture of a Black Lab, “if this is your pet, get rid of it’.

A picture of a nice suburban home, “if this is your home, sell it”.

Finally he put up a picture similar to the following.

So many times we are distracted and not focused. We are trying to do many things at once, and not doing any of them as well as we want. If that’s the case, maybe we should take Dr. Jim’s advice and trim out the fatty things holding us back.

Therefore, since we are surrounded by so great a cloud of witnesses, let us also lay aside every weight, and sin which clings so closely, and let us run with endurance the race that is set before us

Those two words have meant much to me over the last decade.

You can watch the clip that contains that quote here. It’s a memorable point in the somewhat forgettable second installment of Pirates of the Caribbean – The Dead Mans Chest.

Captain Jack Sparrow has spent two and a half hours of screentime running from cannibals, pirates, the English Navy, and Davy Joneses crew of fishmen. In the end, it was our plucky pirates own lusts that caught him up, and then he goes on to deliver that line that gives me chills, as he looks unquestionable death right in the face. “Hello Beastie”.

There’s no way out of this one for Jack. There’s no one to be guiled, no rope to swing away with, and no tricks left. It’s the true end.

Yet, even in those very last moments, when all else is taken away from us. When the future and the past are both forgotten, when all our hopes and our fears are swallowed up by the magnitude of the present, we still have a choice.

On one hand we can give up, let our pain make the decision for us and say “it’s too much, what could I possibly do”? On the other hand, we can take what we have been given, look right at what has come our way, and give even our final breath to the right course.

A Flavor In-Between
Blog at WordPress.com.